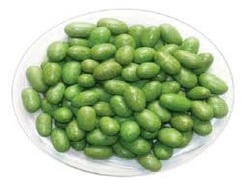 The food we eat starts out in our mouths. But when it comes to nutrition, we think about every other body part first. We look for heart-healthy foods, brain food, foods to ward off cancer or provide the jolt of energy we need to run a marathon. We value high-fiber foods for gastrointestinal health.

But what about our teeth and gums?

A new e-booklet from the American Academy of Cosmetic Dentistry, based in Madison, hopes to fill in that gap, informing consumers about the latest research on foods that promote oral health, along with recipes that incorporate those ingredients.

With all that Easter candy sitting around, it’s as good a time as any to brush up on the subject.

The 19-page booklet, available online only, identifies 21 foods that are good for the teeth or gums, from basil to xylitol.

Who knew that green tea contains a small amount of fluoride, plus an antioxidant that reduces the growth of the bacteria that cause gum disease? Or that shiitake mushrooms contain a sugar that prevents mouth bacteria from growing?

“It wasn’t that long ago that we were saying, don’t eat raisins because they’re sticky and they stay in your teeth.  (Now, it’s OK to eat them, but just be sure to floss well.)

“There’s a huge relationship between the health of your mouth and the rest of your body” . “For example, the same bacteria known to be involved with gum disease are the same bacteria that can affect the heart.”

Jay M. Marks, DMD agrees that oral health is important to systemic health. It is noted that the connection between nutrition and healthy gums and teeth, as summarized in the booklet, is not hard science.

“There’s not a lot of hard research out there,” said DiFrisco, director of membership and marketing for the cosmetic dentistry academy. But noticing a slew of stories lately in the media about nutrition and teeth, they decided to gather what information they could and connect all the dots.

The academy based its list of oral-health-promoting ingredients primarily on two recent studies, he said.

So what are some of these wonder foods? These and others made the cut for the “Healthier Smile” booklet:

Basil: a natural antibiotic, reduces bacteria in the mouth. (Fresh is best.)

Broccoli: forms an acid-resistant film on the teeth, perhaps from the iron. A 2010 study found that after exposure to an acid-based drink like cola, tooth enamel erodes half as quickly when it’s been exposed first to broccoli.

Celery: activates saliva production, which helps clean food particles from the teeth and dilutes sugars or acids in the mouth. Chewing celery also massages the gums.

Lemon: a natural “whitener” that also assists with pH balance in the body. (Note: Lemon meringue pie is not the answer, nor is using lemon juice as a mouth rinse, as the acid can destroy enamel.)

Quinoa: a super-grain loaded with minerals including calcium, magnesium, manganese and phosphorous to strengthen teeth.

Sea salt: offers a blend of minerals (not found in table salt) needed to mineralize and strengthen teeth. (Himalayan or Celtic is suggested.)

There’s also a lot of interest these days in tooth whitening. If you’re looking to avoid foods that would thwart you in that effort, you’ll want to minimize your consumption of coffee, tea, red wine, soy sauce and dark berries – especially after using a tooth whitening product.

“After whitening, when the pores of enamel are opened, you don’t want to drink a couple of glasses of red wine and let it soak in,” said DiFrisco.