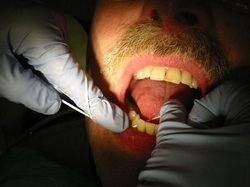 We’ve all heard that we should floss daily. If you leave plague rotting away between your teeth, you’re more likely to deal with gum disease and other serious dental problems. And is that any way to treat the organs to help us speak and eat? But recent information points out a new reason to keep your teeth in good health. As MSNBC.com reports, flossing may fight the visible effects of aging more than any other daily act of hygiene. Receding gum tissue is a problem that plagues older adults. Dr. Eugene Antenucci, dentist spokesperson for the Academy of General

Dentistry, explained why it also ages your appearance to Msnbc.com. According to Dr. Antenucci, “You register an older look because you see more spaces, less and uneven gum tissue.” Research shows that gingivitis, or gum disease, can lead to problems such as stroke, diabetes and respiratory disease. Flossing is your best defense against gingivitis. After all, experts report that up to 40 percent of your teeth surfaces are unreachable by toothbrush. But flossing isn’t all about taking care of your health. If you don’t floss, your looks will pay the price. Dr. Donald S. Clem is a dentist and president-elect of the American Academy of Periodontology Foundation. As he told MSNBC.com, “When gum disease begins to eat away at the bone, there are changes in facial appearance. Once a tooth is lost the bone has no reason to be there. In later stages of periodontal disease we would see disfigurement in terms of caving in of the lips and cheek and wrinkles around the lips and cheeks.” Think you can run to the plastic surgeon to take care of your sinking face? Think again. If you lose bone mass in your face, no amounts of Botox or fillers will mask the caverns that once were your pump, youthful cheeks. Not to mention, most men and women age 65 and older list a smile as the most important part of a person’s appearance.

And apparently, flossing is the key to it all.